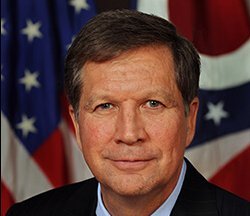 Blogger Wes Annac,  has posted a great article with reference to the Stephen Colbert interview on November 6th with Ohio Gov. John Kasich, who opposes legalization:

During the interview, Colbert pointed out the hypocrisy of not wanting to “confuse kids about drugs” in a country where alcohol is legal and culturally acceptable.

Colbert pointed out that legal alcohol already sends a confusing message about drugs to children, which Kasich claims he wants to avoid by keeping pot illegal.

“‘The problem is we have a huge drug crisis in this country,’ Kasich said.

“‘Is that really pot that’s the drug crisis?’ Colbert countered. ‘Lots of people are going to jail for minor infractions and it ruins their entire life.’

“‘We don’t do that in Ohio. We don’t even want serious drug addicts to be locked in prison for their rest of their lives. We treat them and we pass them off to the community,’ Kasich said. ‘The problem with marijuana is this: We don’t want to tell our kids, ‘Don’t do drugs, but by the way, this drug’s okay.’’”

“‘Isn’t that what alcohol is?’ Colbert replied.”

Kasich also admitted that he’s smoked marijuana before, which, as Colbert pointed out, could’ve eliminated the possibility of him becoming governor in the future if he were caught.

“When asked by Colbert if he had smoked marijuana before, Kasich said he had — and was never caught by the police.

“If you had been caught smoking marijuana and had it on your record, would you be the governor of Ohio right now?” Colbert asked.

“‘Maybe,’ Kasich said. ‘If I got you to come out and campaign for me.’

“‘What I mean is it ruins a life to have that police record because you can’t get a job.’”

Wes then expands on the topic of Would Cannabis Legalization Confuse Kids About Drugs. “I’m considered a millennial, and I think I can speak for most of the youth when I say that I was confused about drugs as a kid. I was always told not to do them, but I watched the adults around me drink and smoke cigarettes.”

(Maybe if social media wasn’t censoring things we could have more open conversations about it.