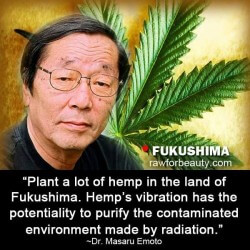 One of the most exciting but lesser known properties of the hemp plant is that it leaches contaminants from soil, a process known as phytoremediation.

Amazingly, it’s being discovered that hemp goes so far as to purify radioactive soil such as found at nuclear disaster sites.

For more than a decade, industrial hemp growing in the Ukraine near Chernobyl has been helping to irradiate the soil.

As far back as 2012, the renowned Dr. Masaru Emoto urged Japan to consider hemp as their solution to purify the radiation caused by the meltdown at Fukushima:

One of the reasons Japan has been slow to follow in the successful path of Chernobyl, or to heed Dr. Emoto’s wise advice is the Cannabis Control Law. This was inserted into Japanese law in 1948 during U.S. occupation. Similar to the strict enforcement of growing industrial hemp in the U.S, this law requires that hemp may only be grown under a license which is highly restricted and difficult to obtain.

CBD for pain relief is one of the most frequent requests we get here at The CBD Expert. In fact, it was CBD for pain that got […]

Today the U.S. House of Representatives overwhelmingly passed an amendment that will finally allow Veterans Affairs physicians to discuss medical marijuana with their patients in […]