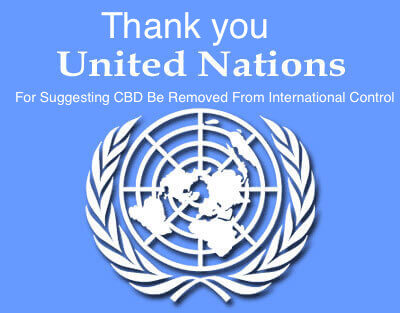 In an exciting and related development, the UN’s World Health Organization (WHO) Expert Committee on Drug Dependence met recently and “recommended that preparations considered to be pure cannabidiol (CBD) not be placed under international drug control as the substance was not found to have psychoactive properties, and presents no potential for abuse or dependence.”

In December of 2017, the WHO released a report in which they conclude that CBD is safe and medically effective. They noted that “several countries have modified their national controls to accommodate CBD as a medicinal product.”

What the United Nations Review Would Mean

The Single Convention, like other international treaties that deal with drugs, is not self-executing. This means that signatory countries must pass domestic legislation to fulfill their treaty obligations.

In terms of the United States, the federal Controlled Substances Act (“CSA”) was passed in 1971. Unlike with the Single Convention, cannabis is not included anywhere in the body of the CSA. Instead, “marijuana” and other items are listed on separate “schedules.”  Each schedule indicates the extent to which those items are controlled. “Marijuana” is a Schedule I drug in the CSA, with “no accepted medical use” and a “high potential for abuse.” This is similar to the Single Convention’s placement of “cannabis” at its Schedules I and IV, reserved for drugs that are “particularly liable to abuse and to produce ill effects” and where “such liability is not offset by substantial therapeutic advantages.”

It’s important to note that even if the Single Convention were abolished entirely, its legacy would live on in the CSA and other domestic laws of its signatories, until those laws were also repealed.

Good News for the Future of CBD

The recent actions of the United Nations and WHO bode extremely well for the future of CBD, and we support and applaud their efforts.